An Evening in Conversation with Andy Stein (LIVE): Coming Soon to Fiddle School 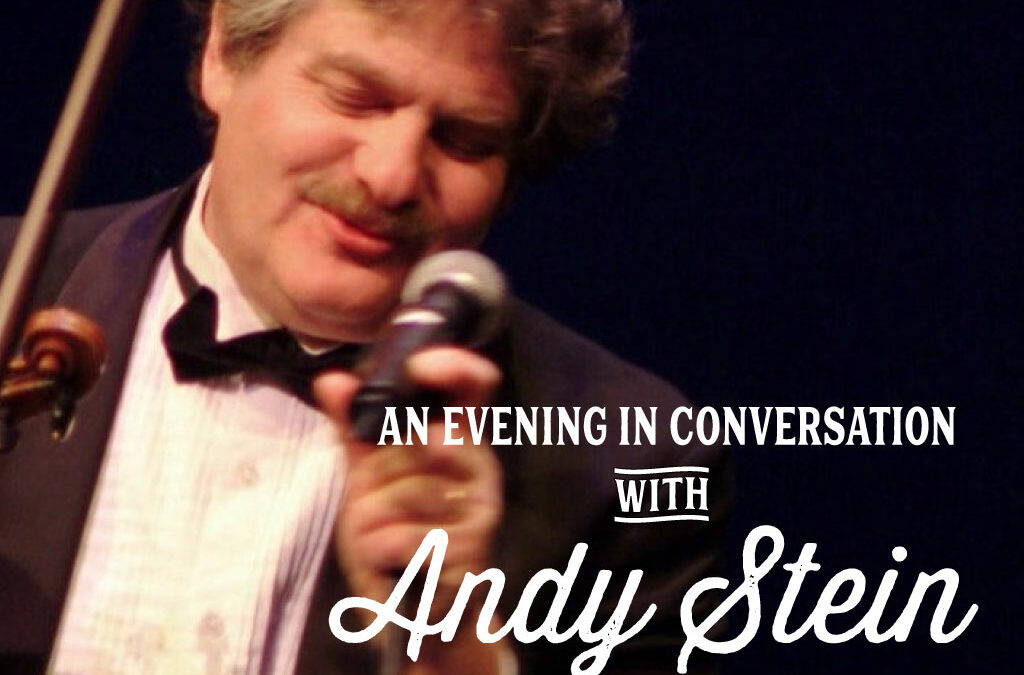 I must have been about ten years old when I discovered Andy Stein on the car radio while my parents were listening to “Prairie Home Companion.” Sure I was young, but I remember his music as a sort of revelation. He was one of the first jazz violinists I’d EVER heard, and I knew then that this was a style that I’d want to play someday. So, years later, when I first met Andy while teaching a camp together, I was thrilled to hear his musical stories and take in his virtuosity and playful sense of humor. It is with great pleasure that I announce him as our SPECIAL SATURDAY NIGHT GUEST ARTIST at Fiddle School’s online Swing Improv Weekend. If you’d like to come to our live conversation with Andy, reserve your spot here.

Our Saturday night interview specials conducted by entertainment professional, Adam Kulakow, have been a smashing success. Come get to know Andy and the legends he’s met along the way.

Join us as a half-day camper or buy a ticket to attend the interview with Andy Stein. To learn more about him, read on and take a listen to this clip of him playing “Sunshine,” originally recorded by Joe Venuti and Eddie Lang His resume is nothing short of extraordinary.

Andy Stein is a musician with a “checkered past.” Besides freelancing as a violinist/violist in chamber and orchestra groups in his native New York, he has recorded with Itzhak Perlman, Placido Domingo, Marilyn Horne, Frederica Von Stade, toured China with a string quartet, and performed concertos with orchestras in New York, Chicago, New England, Pacific Northwest, and the South. He has appeared on numerous television programs including Late Night with David Letterman, Saturday Night Live, Great performances (PBS) and As The World Turns (CBS). He has also been a featured soloist in a number of Broadway Shows, including the Lincoln Center production of “Anything Goes,” and the 1990’s Broadway revivals of “Guys and Dolls” and “Fiddler on the Roof.” He has produced records of rock ‘n’ roll and jazz, and conducted on radio and television.

For twenty-two years his violin and saxophone were heard weekly (hopefully not weakly) on public radio nationwide, as a member of the Guys All-Star Shoe Band, the “house band” on A Prairie Home Companion with Garrison Keillor.

It’s an honor and a pleasure to welcome Andy as our guest at the upcoming Swing Improv Weekend virtual camp. If you’d like to attend Andy’s talk, hear more about his musical history and philosophy, and pose questions of your own, you can get your ticket here.