I started playing the violin before I knew any better! I was five at the time, and apparently, I had grown fond of the piano, as my grandmother had a baby grand in her living room, quite an extravagance for the wife of a barber in the early 1960s! I liked to sit on the piano bench with her as she played and she would have me hit a few high notes to play along with her. This led to my repeated requests of mom and dad to get us a piano for our house. Having neither the means nor the space, my mom embarked on an adventure of finding a violin teacher in Toledo, Ohio in 1965 willing to teach a 5-year-old. This was essentially unheard of in our town! She approached a teacher who offered classes to 4th and 5th graders and proposed just such an absurdity, and it did not initially look promising. However, this teacher just happened to be married to a music professor at the University of Toledo, who supposedly (perhaps aware of the introduction of Suzuki method in other parts of the US) encouraged his wife to give me a try. Predicting I would not last a month, she reluctantly agreed, with the promise from her husband that he would sit in on my lessons. Although I have no distinct memory of him actually being in the room, in retrospect, I now feel honored he was there. Mrs. Gunderson was an old-school classical teacher, prone to more brow beating and pointing out the negative in my young playing, and I recall more than one occasion when I was brought to tears for “not practicing enough this week” and the like. But I did really like, at 5, the prize at the end of my first recital: popsicles and ice cream for all us students! That got my attention (being kind of like my first paid gig), and I immediately asked my mom if I could hold my own “recital” outside our house, featuring the only song I knew- Mary Had a Little Lamb! She agreed, I rounded up all my little friends from the neighborhood, and following my brief but spirited performance, mom gladly dispensed the popsicles!

I continued to study violin with Mrs. Gunderson for the next 5 years, gradually acclimating to the unique challenges of a fretless instrument- I am so grateful that I did not know what frets were then, and therefore simply set my sights on learning the violin in blissful semi-ignorance. Not only were there recitals to prepare for 2 time a year, but I began to compete in String Instrument competitions and occasionally won some prize money! In 4th grade, I began studying with a new teacher, Miss Vashaw, who was newly back from some time in New York City, where she taught and wrote instructional books for violin. She was in her 60s at that time, and was not only an excellent violin teacher, but a great motivator, encouraging and bringing out the best in her students, and an extra “grandmother” to me, taking me under her wing and making me feel seen and heard. She also gave me my first rock ‘n roll album…one day after a lesson, we were looking through her large collection of classical albums and came upon the Beatles Sargent Pepper’s Lonely Hearts Club Band, and seeing my curiosity and not missing a beat, she gave it to me- not loaned, but gifted!  Well, from the opening bars of the track “A Day in the Life”, my understanding of music was forever changed…and that great Orchestral section on that track seemed to say “Violins can Rock!” It would be a while before I experienced that literally, but the seed was planted.

Middle school and Junior High saw me forming a Trio with my cello playing brother Dave and our viola playing friend Dale, playing for my parent’s bridge clubs and holiday gathering, and making a little coin along the way. 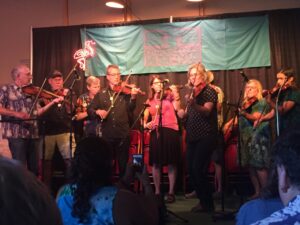 Sprinkled in among all our classical repertoire, there were a few more contemporary pieces, but they were still a rarity. Another personal musical milestone was playing in my first pit orchestra in 8th grade for a local high school production of “Tea for Two”, with my brother Dave and me making up the entire string section!  Upon entering high school myself, I joined the Toledo Youth Orchestral and auditioned into the 1st violin section, working my way into the second chair over a few years, and soloing with them in my junior year. I also recall the excitement of doing a short tour a towns a few hours away from Toledo during those years and the joy of participating in a good orchestral performance.

Despite the encouragement of Miss Vashaw that I consider studying music in college, I opted instead for pre-med- I loved science and biology and felt drawn to the idea of being a healer as a profession. But my violin went along for the ride, and came out at the holidays, for a talent show in Medical School, and other such occasions. My introduction to bluegrass and old timey music came years later during my Family Practice residency when I was actually living in the Blue grass state, in Covington, KY, just across the river from Cincinnati, Ohio. One of my mentors, Dr. Andy Baker, an obstetrician, also played banjo and enjoyed jamming to bluegrass tunes. Procuring a copy of the Fiddler’s Real Book, I joined him and a few other players at his actual off-the-grid log cabin on the Ohio River in Rabbit Hash, Kentucky to learn my first old timey tunes by candle light and fueled by Wild Turkey!

My next big shift in musical reality came from a patient of mine around my 37th turn around the sun. Lou kind of defies being pigeon-holed into a style of play, but he is a master guitarist, and what he turned me onto was improvising by ear. He also exposed me to experimental jazz, and other fringe trends that vastly expanded my understanding and tastes in music. Learning to play by ear meant all I needed to know was the key a tune was in, and I could find a way for my fiddle to sing along. This began a pretty continuous period of getting together with friends for casual jam sessions that include pop tunes, jazz, blues, rock, bluegrass- all musical genres were welcome! Then, 3 summers ago, I finally got to join my guitar strumming, harmonica blowing, John-Cash sounding friend Kevin at the summer music camp he had already been to two summers running. 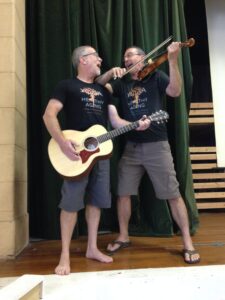 The moment I walked into the cafeteria/greeting area that first time, I know I was home! The California Coastal Music Camp, no longer residing on the coast, has been around for over 20 years, and some of the campers have been coming for almost that long!!! Camp is welcoming to players of all levels and supports folk, blues, jazz, rock and roll, and more. It gave me an opportunity to dive into realms I had rarely visited: Celtic fiddle style, Mandolin, Django Gypsy Jazz ensemble, and this past summer, Katie’s Western Swing Fiddle! And probably not since my early days, I am playing on my own most days of the week. What a ride and what a joy this humble violin has provided!