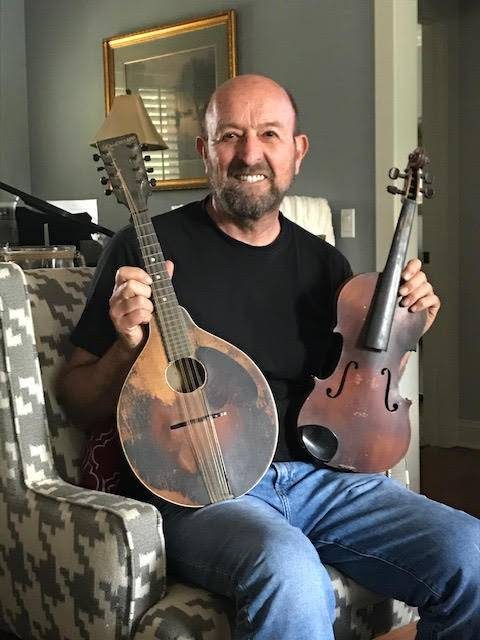 I currently reside in the rural west Tennessee community that I grew up in. We raised cotton, hogs, and a large garden. We were poor people like most in the community. We had music and making music to fill the hours that chores and the cotton patch didn’t require. Yes, I know too much about hoeing and picking cotton by hand. No complaints though, it built a strong work ethic.

At 67 and now retired for seven years, you get plenty of time to reflect on things  (and music is one of those that has made my to-do list off and on), but a lot of years were absorbed working and rearing children.

To begin with, music was always a part of my Dad’s family even though neither of his parents played instruments or sang. Gone before my birth, it was said my grandfather Levi John Eli was a fiddler but he died before my arrival. My dad’s siblings, six in total, sang and or played. Family gatherings always included a few hours of music…singing, mandolin, and guitar but no fiddling. My dad had an old Harmony guitar that had given up the ghost but was still a little playable. It wasn’t beginner friendly and was falling apart. My sister, Nancy, was taking piano lessons at school from Ms. Kate, who was a rather large old maid who gave piano lessons for a $1.00 per month. Nancy stayed on the piano stool from the first grade through graduation. The piano was one of the household treasures as it had been purchased by my maternal grandfather for his wife in the early 1900s. He purchased it from New York and it made the trip to Saltillo Tennessee by river barge. It’s a beautiful old upright with walnut, and cherry woods and features a fourth pedal said to be a banjo/honky-tonk tone. I wanted to play but it wasn’t cool for boys to take piano lessons…only the girls and a few sissy boys took the lessons.

I got the bug for a guitar and my dad gave me the proceeds from selling one of our hogs which I fed before and after school. Loaded with $35 to spend, we ordered a Montgomery Ward Airline from the catalog and awaited its arrival. It took a month and came by rail freight from Chicago to our county seat, Lexington, TN. It was a lot of money to spend but far less than the $100 for a new Gibson J45 at Wright’s furniture store in Lexington. We were ecstatic to get the Monkey Ward special. It was like fretting a fence to quote “Doc Watson”, so my ever-handy Dad improved the action with some adjustments on the bridge and nut. My dad acquired an old Kalamazoo mandolin from one of my uncles who had quit playing. The mandolin had supposedly made a few trips to the Opry stage with the John D. Springer quartet back in the day. My dad was a good rhythm guitarist and had seconded many fiddlers at square dances as well as his brother who was a really good mandolin player. The high school years passed with my brother and I learned to play rhythm behind my dad’s mandolin playing. Sally Goodin, Ragtime Annie, Milk Cow Blues, Chicken Reel, Wednesday Night Waltz all still ring in my head (with my dad questioning why we couldn’t hear the chord changes). Finally, we learned to hum the tunes which opened the door to hearing the changes.

On to fiddling, our little town of 300 had a 1 through grade 12 school that I attended and graduated from with my fellow 22 classmates. An annual event and fundraiser for the school was the West Tennessee Fiddlers Contest. It ran for 50 years before ending in around 1999. In 1968, I attended my first contest and heard live fiddling for the first time. It lit a fire in my soul that has never died.     The judges required a playoff to determine the winner. Wayne Jerrolds, who eventually had a short stint with Bill Monroe, played Listen to the Mockingbird while his opponent a young man from Corinth, Mississippi played Blue Moon of Kentucky. I can still hear the soulful crying notes from Blue Moon of Kentucky and the shuffles from Listen to the Mockingbird. I was forever hooked to those sounds.

Our neighbor, Henry Bivens, a retired blacksmith, owned a fiddle and was a poor to fair player according to my Dad. I never heard him play. Henry routinely enjoyed adult beverages and dipped snuff with a sweet gum toothbrush. He and his wife Hattie sat on the front porch of their home dipping snuff and sometimes with their feet in a pan of water for cooling in the summer. They both passed away around 1969. My dad bought Henry’s fiddle for me when their possessions were auctioned.

Armed with mandolin tunes, we all attempted to play the fiddle with little success.    Lessons or money for lessons didn’t exist. The fiddle stayed in the dilapidated case but I counted it in my prized possessions. Soon it was off to college. The day before leaving home for college I got my most memorable lessons for life words from Dad. I had gotten loans and scholarships to pay the way but he told me the day before I left as we stood in the side yard looking at the fields, “don’t go off and act a fool or your ass will be back here in that g**dammed cotton patch”. Properly motivated, I graduated with honors holding a chemical engineering degree. After graduating I packed my fiddle, guitar, and two suitcases with the rest of my junk to begin work with Dow Chemical. Music for the most part was on hold except for a beer-loving band that I played in while with Dow. I soon began job-hopping and relocating to enhance my career.

In two of my 13 relocations, I got the opportunity for fiddle lessons but they were short-lived. The first in Huntington, West Virginia in 1977. The instructor quit after two lessons and the second came in Columbia TN circa 1982. He quit commuting from Nashville after four lessons. I did learn from the second teacher that the old fiddle was really not very playable…..Back in the case!

I continued guitar noodling off and on through the1970 to 2013 period. No serious pursuit with the guitar as chemical plant management and children took all my time. Upon retiring and acquiring an iPad I discovered YouTube. We had moved from Nashville and were living in our weekend getaway planning to build a home. I ran across Bryan Sutton playing Beaumont Rag and immediately discovered all of the music tutorials and aids on the internet. I bought a ton of books from Steve Kaufman’s parking lot picker series and practiced all my fingers would allow. I got to a reasonable intermediate level in two years and decided to attend the Kaufman flatpick camp. I got some great guitar tips and a few tunes but the highlight came when I attended a class offered to any and all attendees hosted by Barbara Lamb, who played a short stint with Asleep at the Wheel. The class was titled, “So You Always Wanted to Play the Fiddle”. I left the class knowing I wasn’t too old and that the better my instrument for learning, the easier it would be to get a good sound. I bought a violin and bow a few weeks later in July 2018.

After four torturous months of trying to play by ear and internet tutelage, I bought Brian Wicklund’s American Fiddle Method Book and started at the beginning. I couldn’t stand more than 30 minutes a day but I finally made progress and got comfortable holding the instrument and making recognizable tune noise. I acquired an online teacher and learned a good bit but she didn’t play the way tunes are in my head. She made beautiful music but her real forte was classical.

Along the way, I discovered Fiddle School and Katie Glassman playing the Eighth of January and must have watched that free video 200 times. There was the sound I wanted. I joined fiddle school and haven’t looked back. I try to practice 3 hours a day but seem to lose focus if I go too long and I’m scared of learning bad habits. I’ve set a goal to play pretty well by age 70 or quit. I don’t know if I would really quit but I’m presently loving the journey. It is such good medicine.

I enjoyed penning most of this but I got a little weepy thinking about my dad, sister, and brother, who all met the Cancer foe. The best of my memories with them were around music. The piano my sister played is still at home with my mother, Henry’s fiddle and the old mandolin are resting in my living room. My old Montgomery Ward guitar is sitting in an outbuilding on the farm…..maybe I’ll bring it home to rest too…..