Raising the next generation of fiddlers: Sydney Green on musical parenting 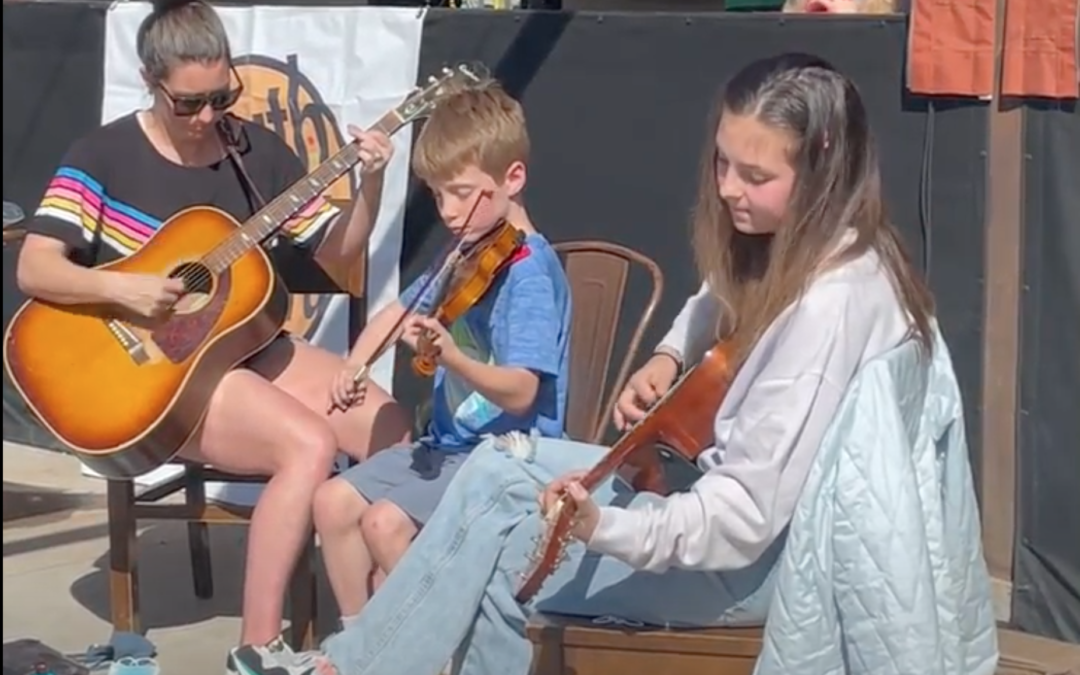 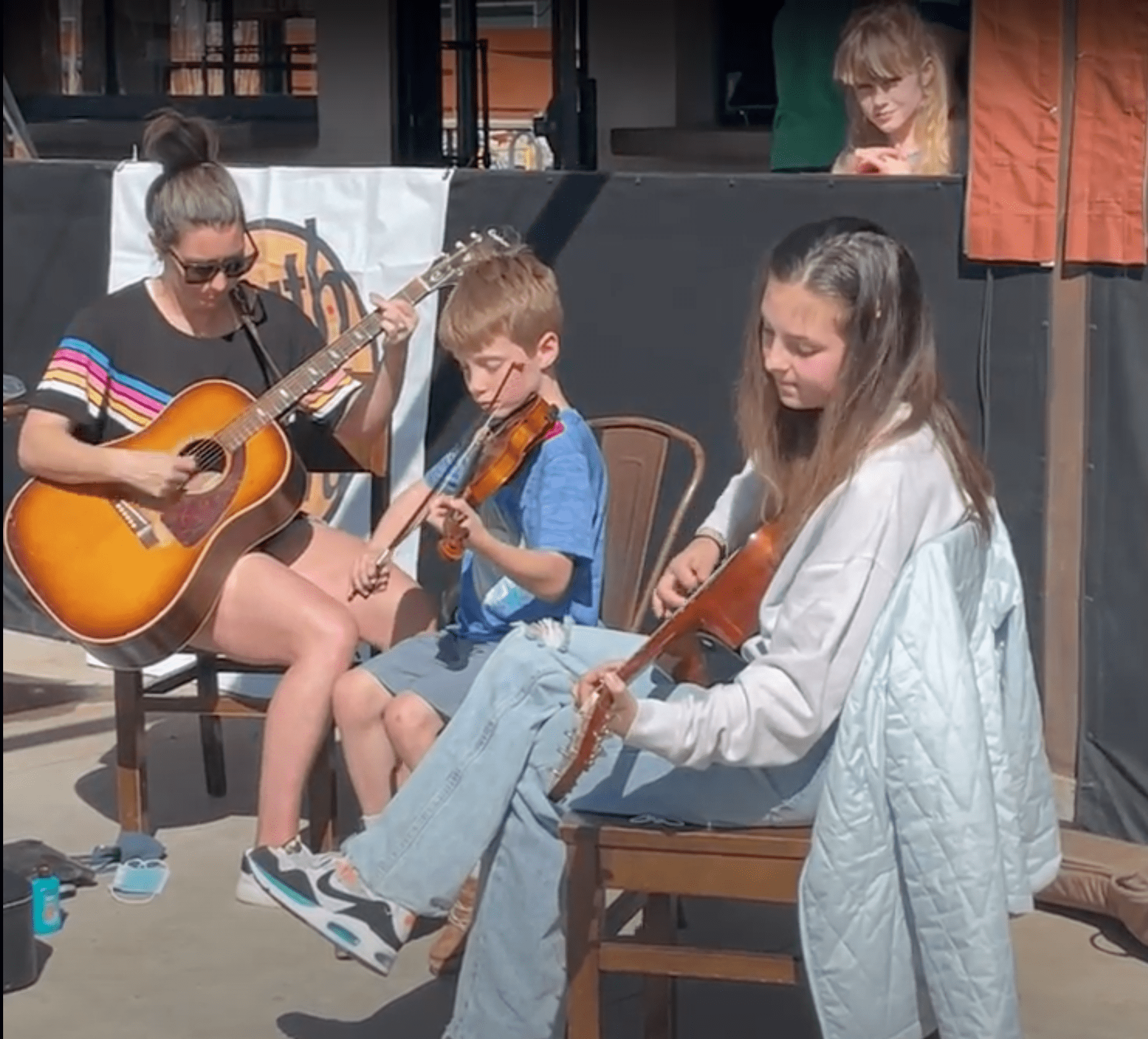 In honor of Mothers’ Day, we reached out to one of our favorite jam buddies and dear friends, Sydney Green, to talk to her about what it’s like to be the mother of three kids who fiddle. She offered lots of insights on how she uses her love of music to help her kids find their own.

Sydney started playing classical violin when she was in 5th grade and played for about four years before she stopped. But in her senior year, Sydney met Bridget Law, a fiddler at her high school who suggested she start taking fiddle lessons. A couple weeks later, she took her first fiddle lesson with teacher Chris Daring and “got bit by the bug immediately.”

After that, Sydney dived head-first into fiddling. Talking about what got her hooked, she said,

“The nice thing with fiddling is the social aspect of it, which was definitely a driver for me. It was so much fun. We’d go to Chris’s house and she’d host teenage jam sessions all the time. That’s where Katie and I met, and a bunch of other people our age, and we would get together all the time. That’s also what encouraged me to learn guitar; I wanted to play more, rather than just playing my few fiddle songs. I wanted to be able to keep up and stay in the jam. With my own children, I think that’s the piece about fiddling that I truly value, that community and for them to find their friendships and the fun in music by playing with their peers and playing with each other.”

Sydney’s own mom played an important role in her musical life. A talented pianist herself, Syd’s mom Tia “was super encouraging of me, and she wanted me to find my own musical path.” And she loved fiddle music, which didn’t hurt either. “Turkey in the Straw was her favorite,” Sydney recalled with a smile.

Shortly after Syd picked up fiddling, she started going to fiddle contests. Her first contest was the Royal Gorge contest in Colorado, where she remembers the warm, supportive atmosphere. “I remember getting positive attention about how I sounded. Being celebrated on stage felt really good,” she said.

That year, Syd also went to the National Old Time Fiddlers’ Contest in Weiser, Idaho for the first time.

“It was so much fun to meet pretty much everybody that I’m still friends with today, people I enjoy and who I love playing with when I get the rare chance. That’s definitely what fiddle contests are about for us. To be able to go to contests and just be surrounded by the music is such a big draw. That’s why Weiser has always been such a fond memory for me, because it’s one of the few times you’re just totally in the music for days on end.”

Now a mom of three, Sydney has the opportunity to pass on that immersive experience of community to her own kids.

“I took Lexi to Weiser when she was pretty young. She got to go with me two or three years before the boys came. She loved being around the music. Then, two years ago, we brought the boys with us. They still talk about it all the time. Last year, not being able to go because of the pandemic, their world just collapsed. It’s been sad not to be able to take them because these are the memories that I treasure and I want them to have. It will also be a part of their longevity in playing fiddle, so I’m looking forward to bringing some of those experiences to them again. Hopefully we’ll do some contests this year.”

Syd emphasized several times how important the fiddle community is to her and her kids. Not only is it fun, but the community is what will have her kids fiddling in the long term, she said.

“I knew that community would be the number one reason they would keep playing, and that is still something that we’re fostering and developing. That’s why going to contests is so important, going to Weiser is so important. In order to keep them engaged and interested, it comes down to the community.”

And contests aren’t the only way that Sydney and her family participate in that musical circle. Syd also finds opportunities for her kids to play out in the community, whether it’s a jam session or an event where they’re playing for other people. “For them to be able to share their music and see the reaction they get from other people, [see] that this is something that brings joy and fun and other positive reinforcements, is something that’s really important to me,” she said.

Watching her kids develop into unique individual musicians has been rewarding for Sydney, especially as a musician herself.

“It’s been fun. They’re all been really motivated in their own ways, and now they’re getting to a place where they do it because they enjoy it, not just because mom does it. It’s been good to see them just develop their own musical connections. It’s great to see the personalization of music and how it’s individual to each of them.”

What helped her kids develop those unique connections, beside forming bonds with their peers in the fiddle community?

“As things have clicked, as they start to develop a sound and find that song that just really works for them and feel how fun it is when we can play together, that’s the point where they really feel that musical joy. As they’ve gotten older and have been playing longer, they have more moments like that.”

Sydney’s kids are great little fiddlers, and part of that is probably due to their young starts as musicians. Lexi, the oldest, started when she was 6, while her twin brothers Britton and Ellis started playing when they were 5. Now, each of them have several years of playing experience under their belts and are becoming better and better at practicing on their own. “They’re pretty good at ordering their practice. But when they have to work through a little section, it’s still really hard for them.” That’s when Sydney tends to step in and offer a little more direction to help her kids build good practice habits. She also helps provide day-to-day structure to give her kids consistency in their practice routine.

“The consistency of practice is really important. With them, my goal is at least to build consistency. And I’ll hear grumbling, like, ‘Mom, when do we get a break?’ But I know if they miss two days of practice, it’s an uphill battle the third day. I am straight struggling to get them back on track. It doesn’t mean we don’t occasionally take breaks, but they get reminded if they take too much of a break of how it feels to come back. We have conversations: we’re not gonna put it down for summer break. That’s not how this operates.”

Besides helping her kids create structure, Sydney also helps them by backing them up on rhythm guitar.

“I play guitar with them quite a bit during the week in our practices, especially to review old material and to gear up for playing opportunities. In the summer, we do popcorn jams where we make a bunch of popcorn and go out and play. That just keeps them excited and motivated.”

Sydney recognizes how unique her  family’s situation is. Not everyone who has a parent or a child who can accompany them, but for those who do, it’s a huge advantage. “I try to give them as much guitar opportunity as possible. They totally take it for granted,” she laughs. “I always have my guitar and I’m like “Who’s gonna play a song with me?!” and then I guilt one of them and they’re like ‘Okay, mom,’ and then they end up playing like 3 or 4. It’s fun.”

Practicing and coaching her three kids is no small task, which is one reason Sydney uses Fiddle School’s online resources with them. Britton, 8, uses the learning videos in Fiddle School to learn new tunes on his own. “They work really well for him because the little sections, the way that Katie breaks it down, is very easy for him to manage.” Lexi, 9, relies more on the guitar play-alongs in her practice routine. “It’s been nice for them to have a resource that isn’t me,” said Sydney.

Another perk of helping her kids learn to fiddle: Sydney’s noticed positive effects on her own musicianship.

“I have loved that with them playing, it’s pushed me to keep music going in my own personal realm. That doesn’t look like me sitting down and practicing every day, but I definitely play a lot more than I did and I try to keep myself going with new songs and new material, because it’s important to me that they see me improving as well. It’s less challenging for me to pick up my instrument now that they play.”

As an adult musician, Sydney knows how much her kids will get out of playing later in life.

“I know, at the end of the day, to be an adult that plays music is amazing. You hear so many adults who played music as a kid and they say, ‘Oh, I wish I still played.’ A lot of times kids give it up because it’s no longer cool or they don’t have time for it, or they burn out. So to me, it’s just a matter of building the love, building the consistency, and providing the space for it.”

Sydney builds that love and consistency with her kids in part by sharing her own love of music with them. “We listen to a lot of music where fiddle is the main instrument or an integral instrument. Texas fiddle, Bob Wills, swing, bluegrass. They love listening. They always want to go back to different songs, or they’ll be like, ‘That’s so cool, mom! Can we listen to that again?’” And she does what she says all parents of musical kids need to do for their kids to make it work: “prioritize their practice, prioritize their playing, and prioritize the amount of work that it takes.”

When Syd and her kids talk about fiddling, she often tells them, “If this were easy, everyone would do it. It’s not easy, and that’s what makes it special.’” It seems like the same goes for being a mom of musicians. To all of you parents who put in the work to make music a priority in your family, we are so grateful.